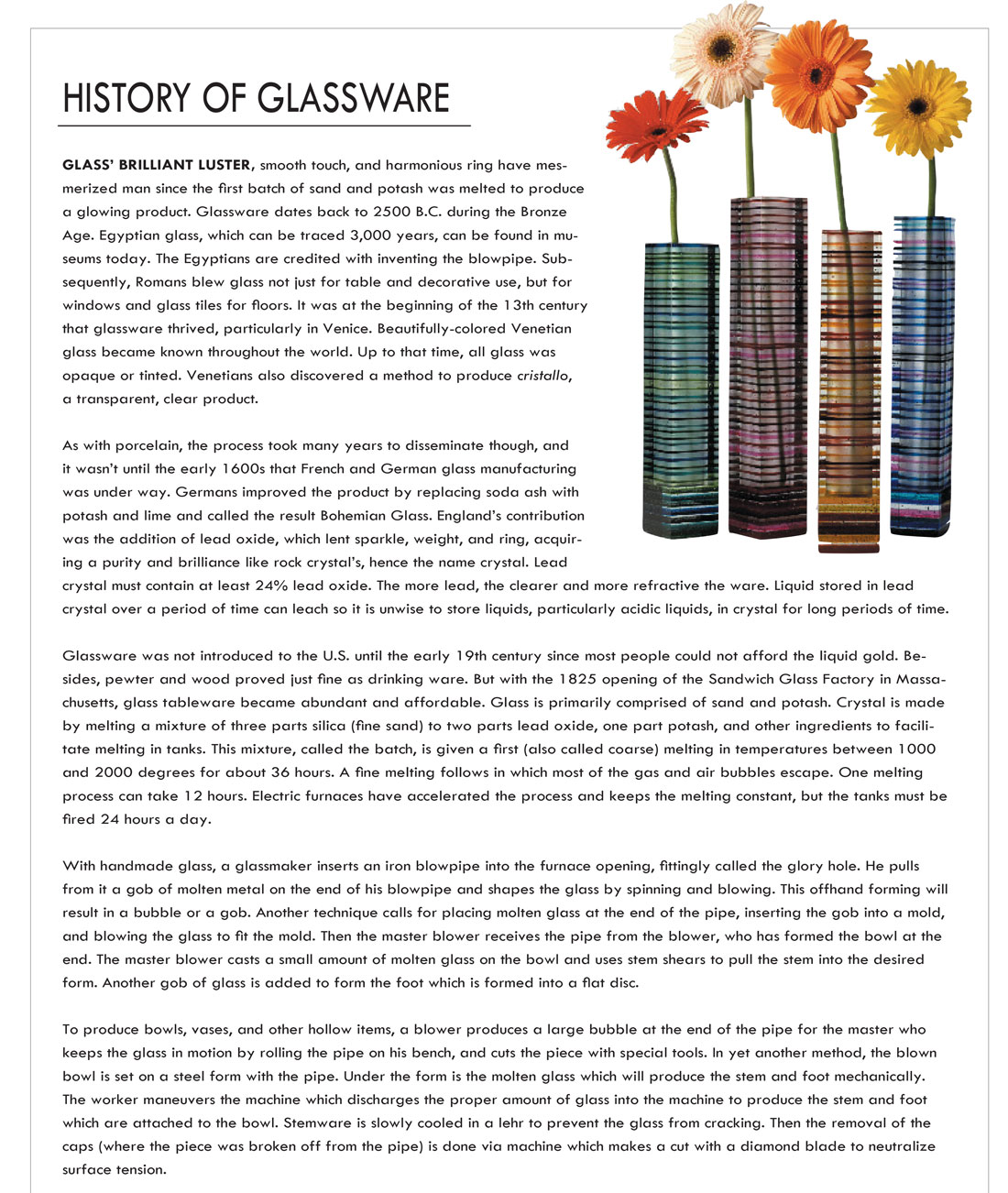 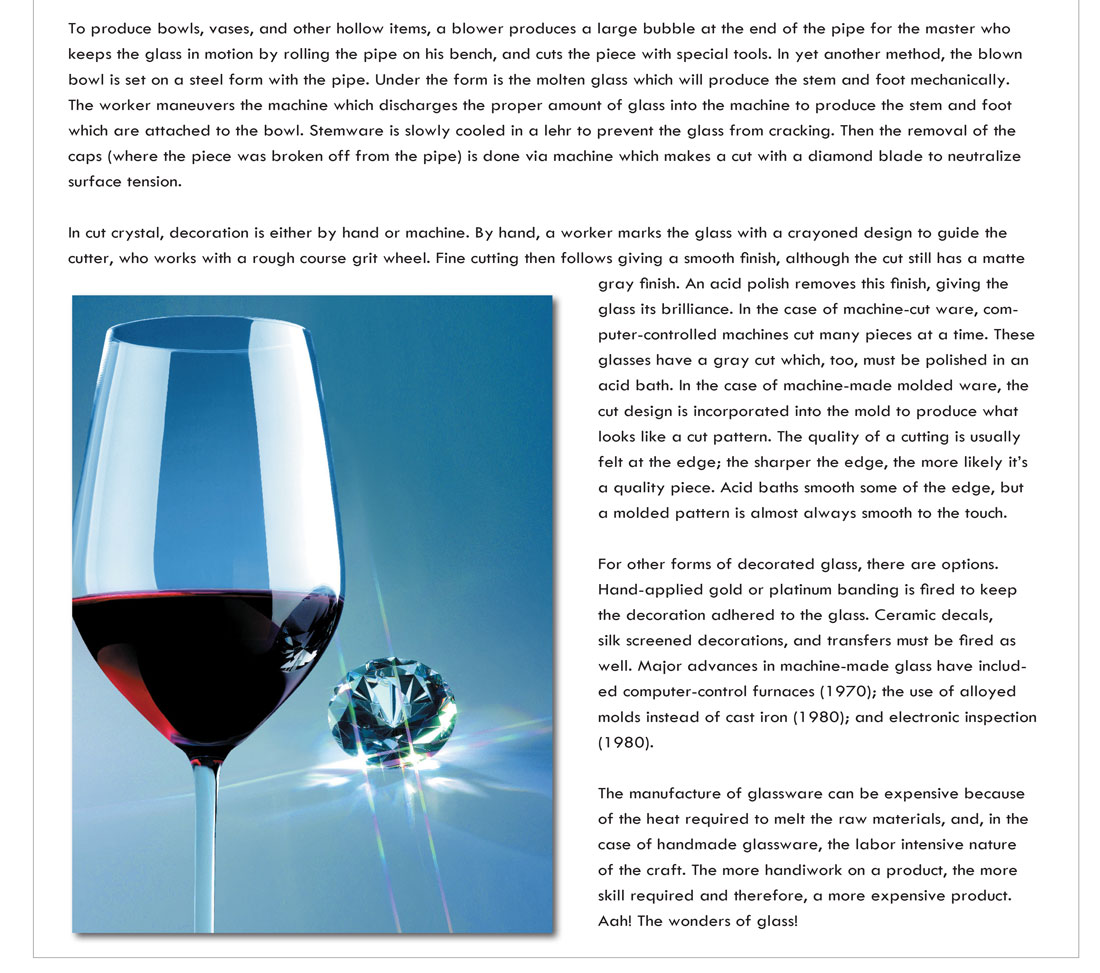 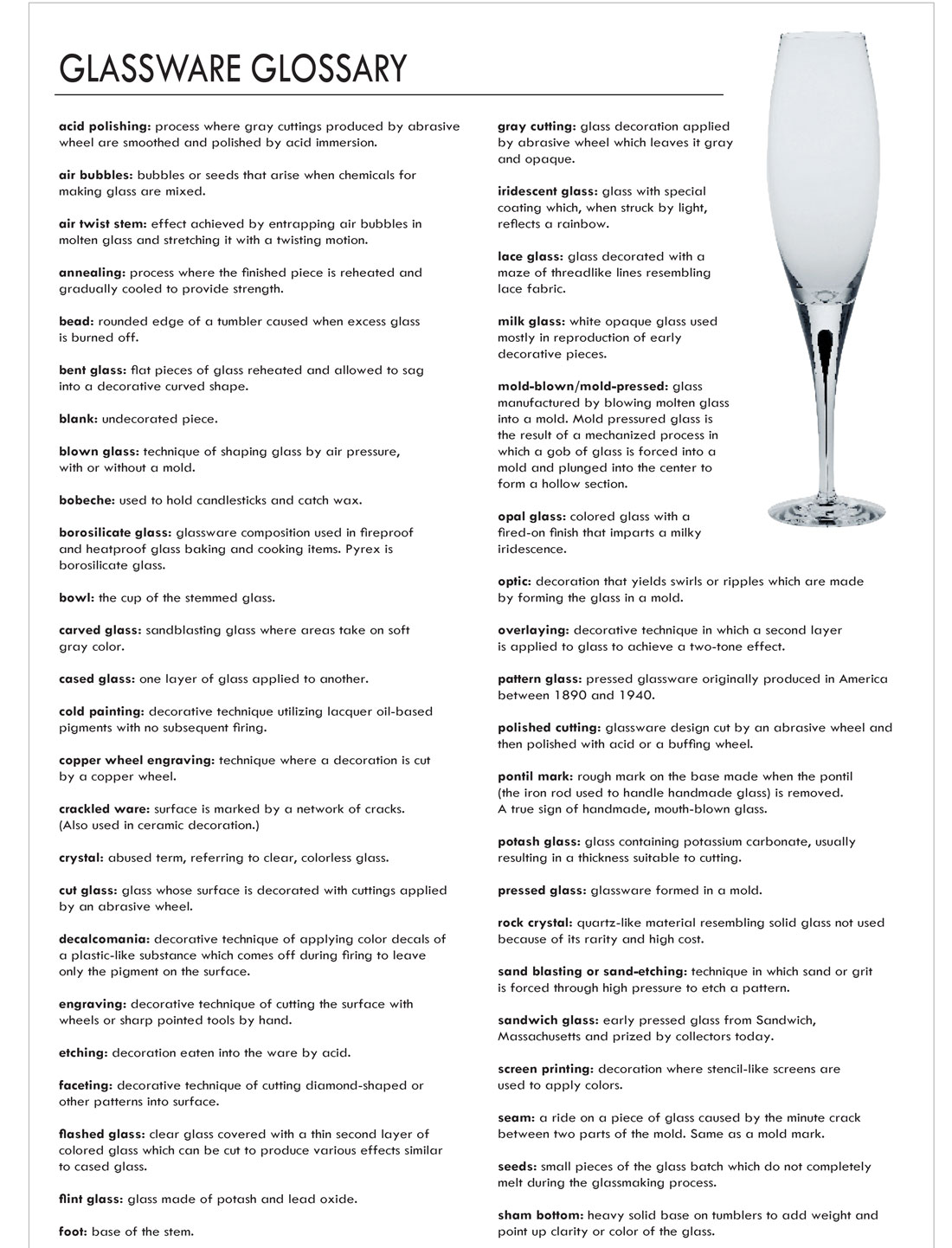 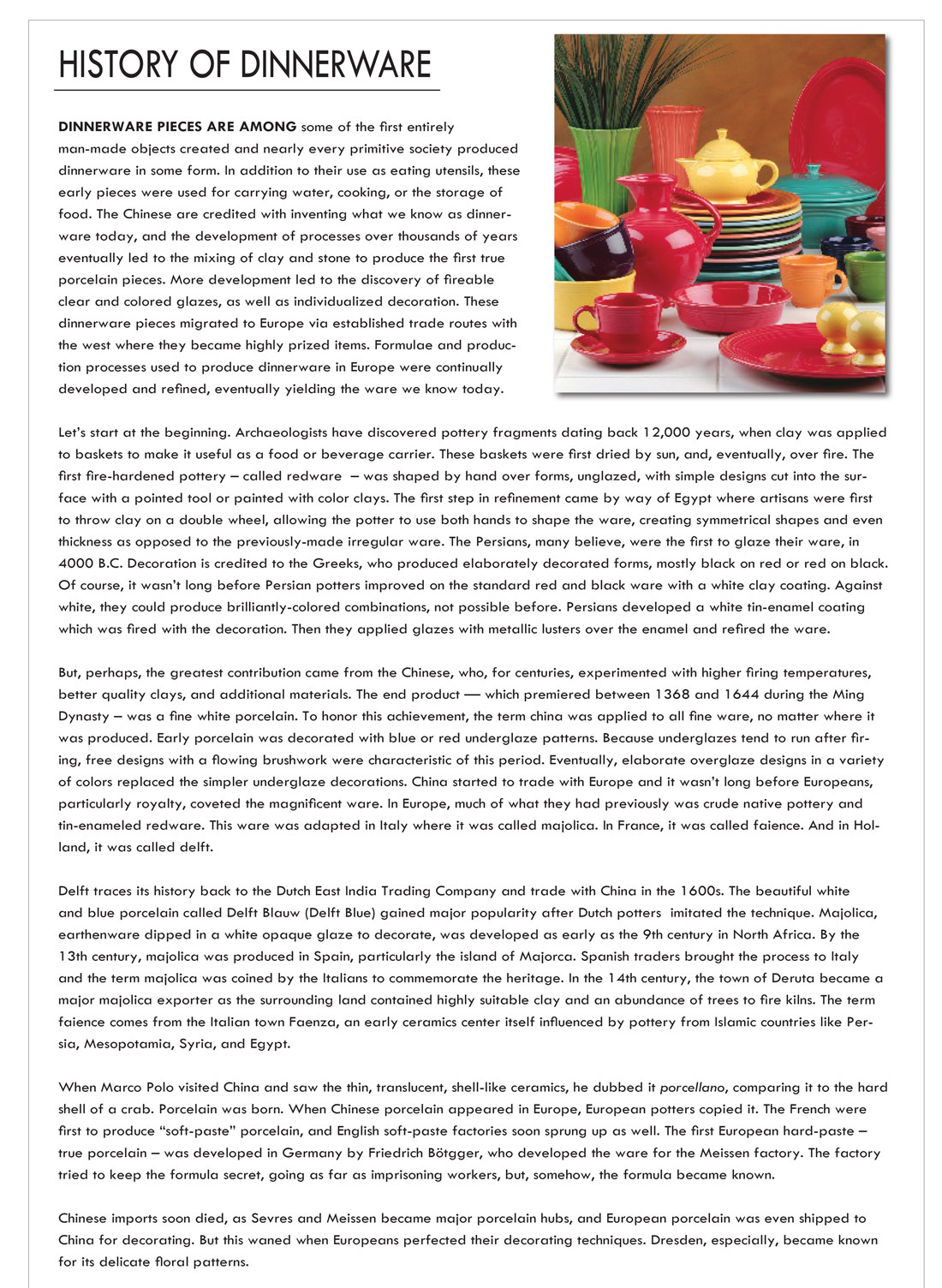 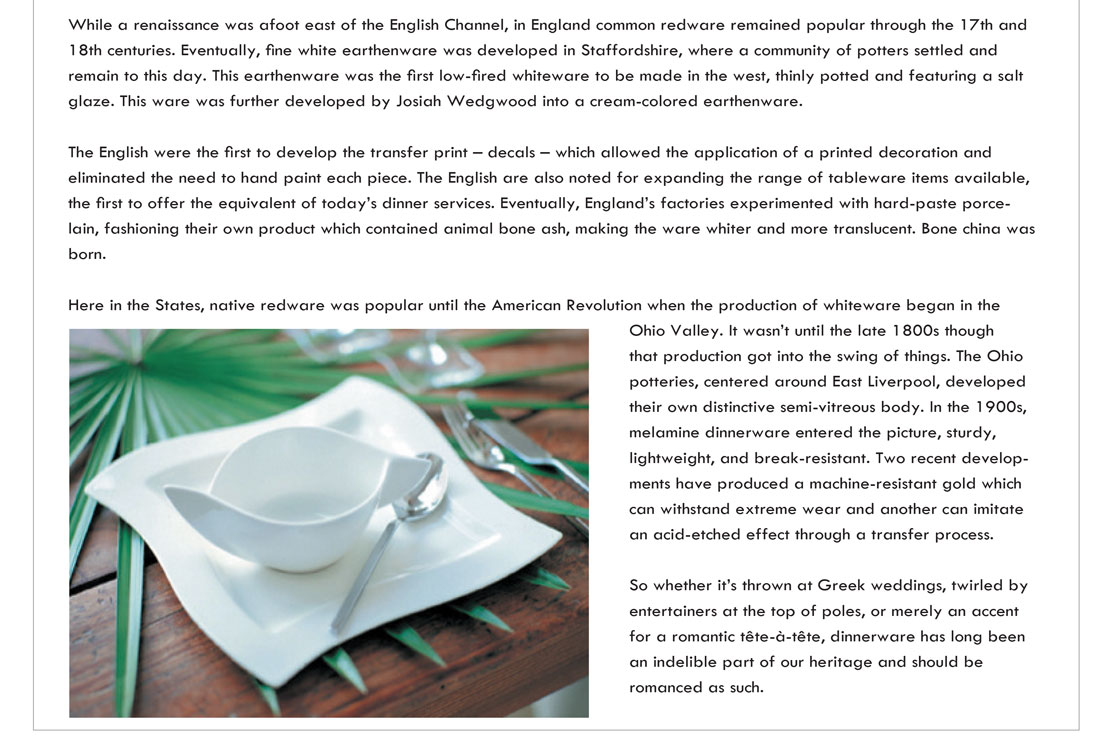 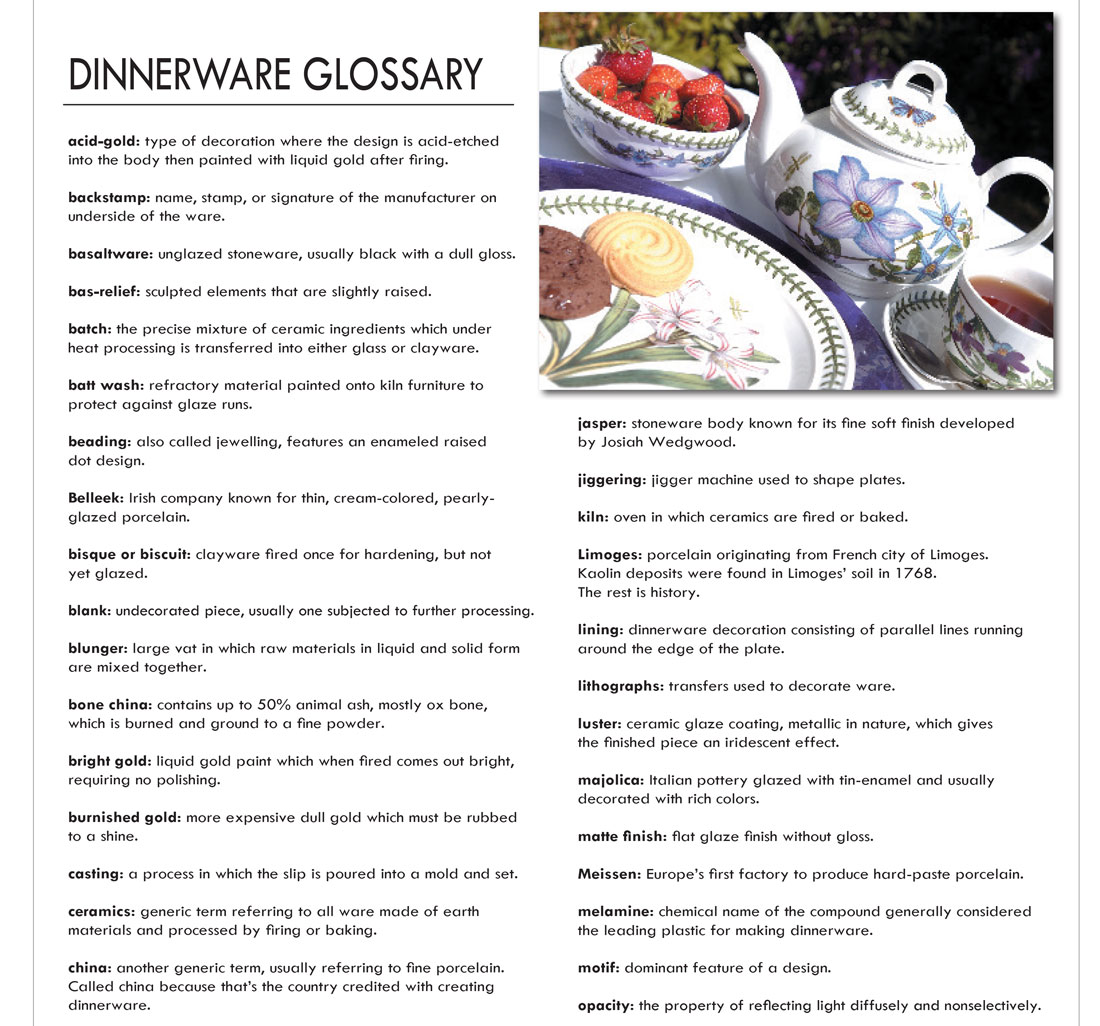 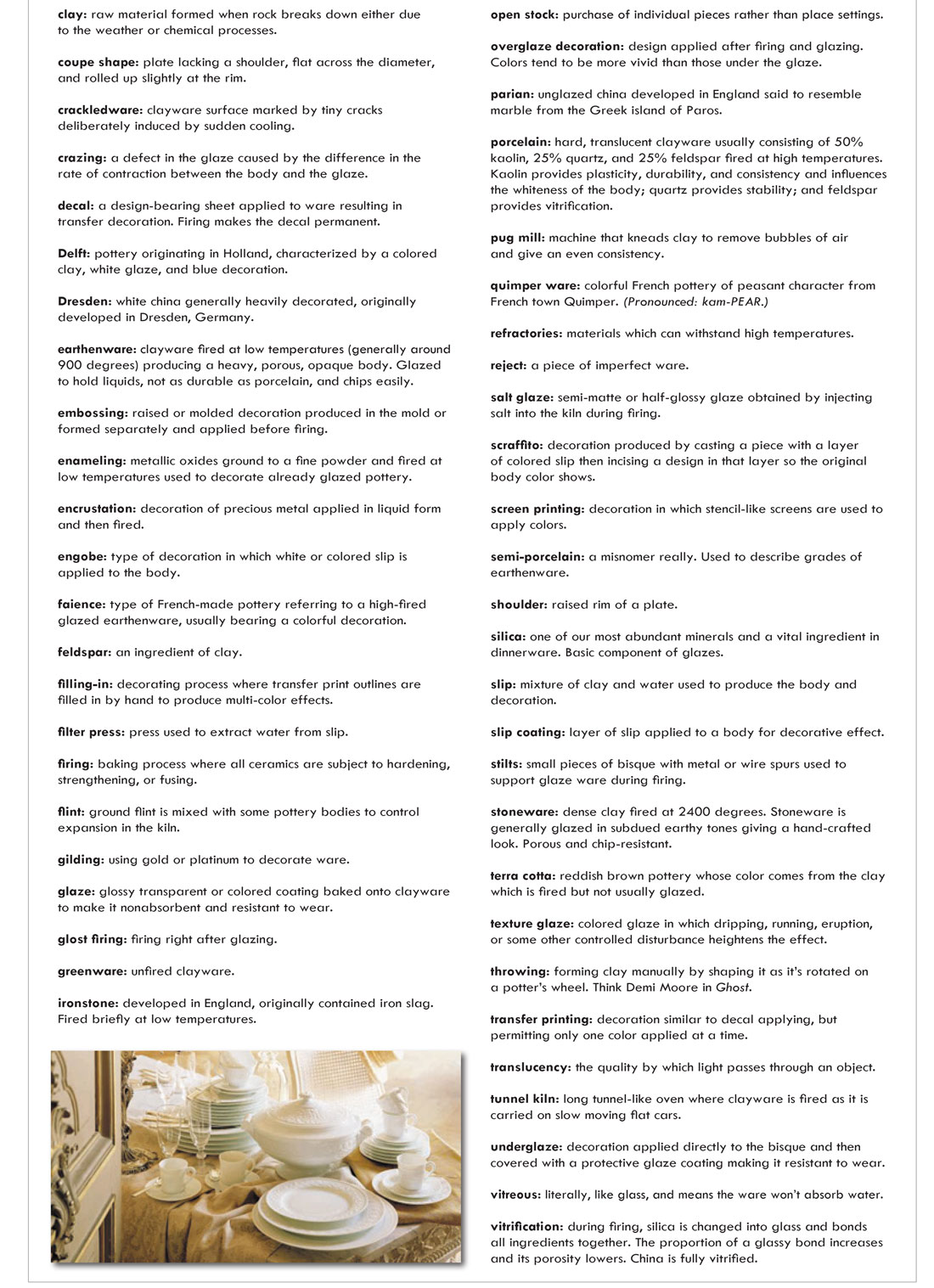 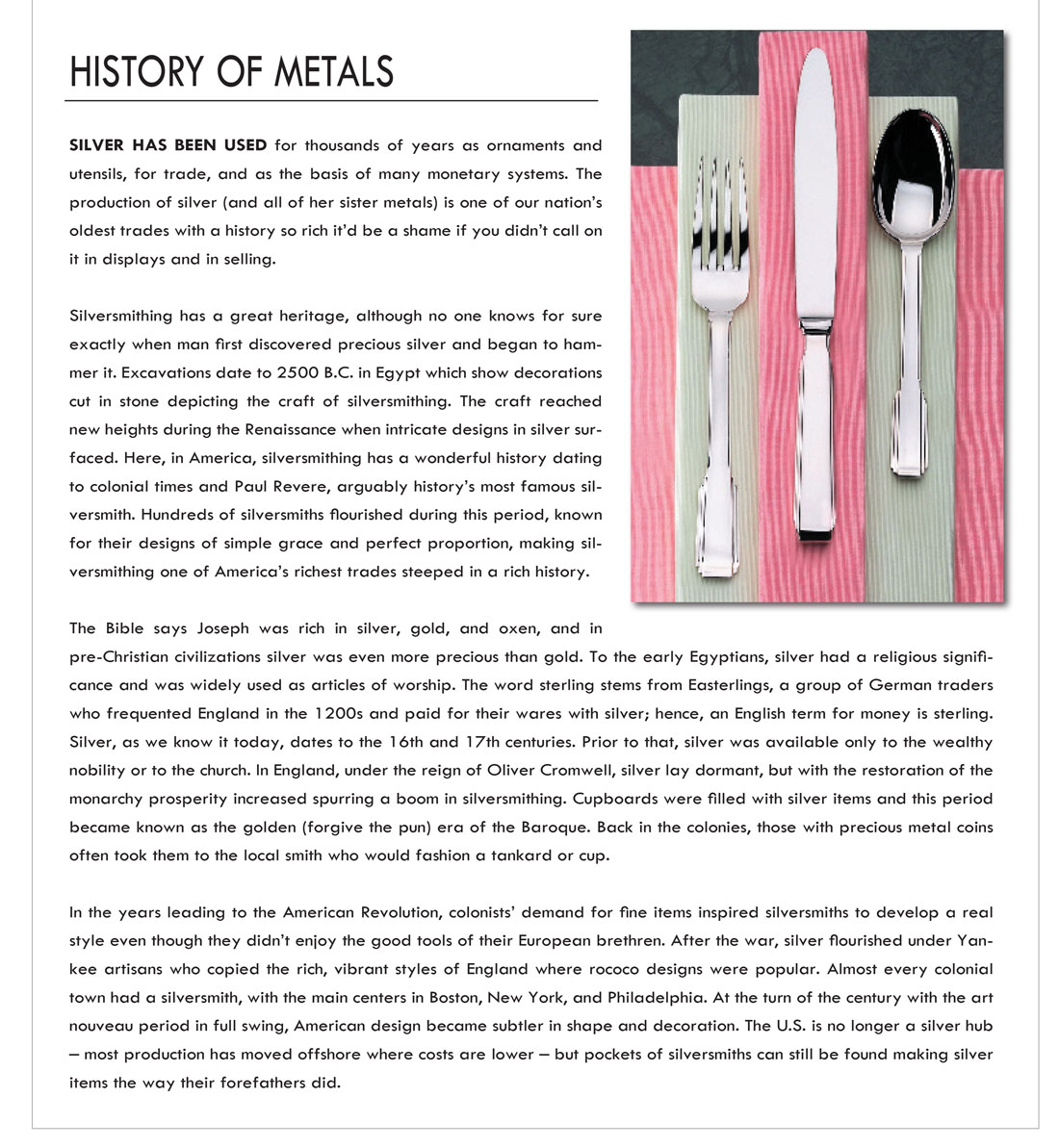 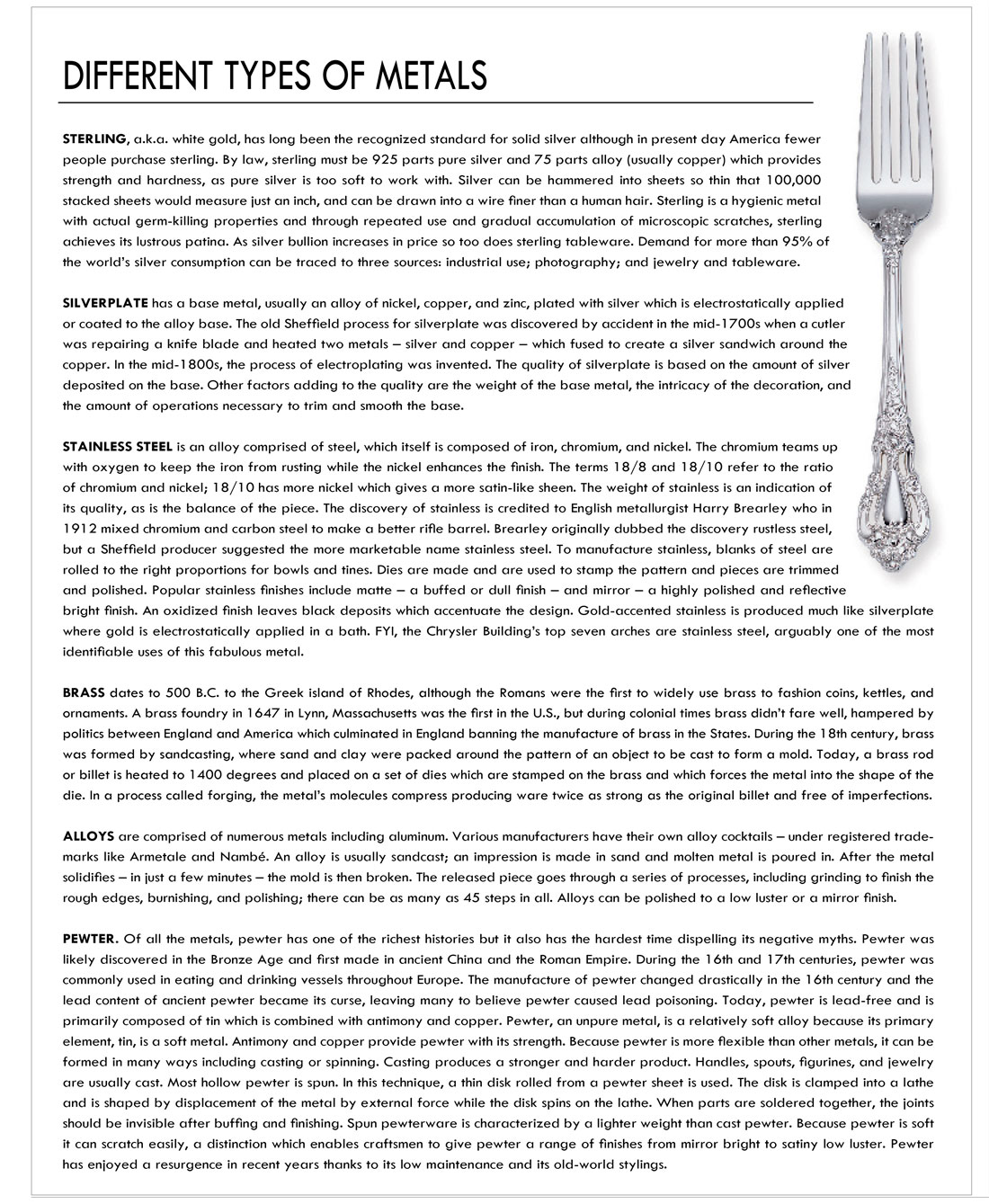 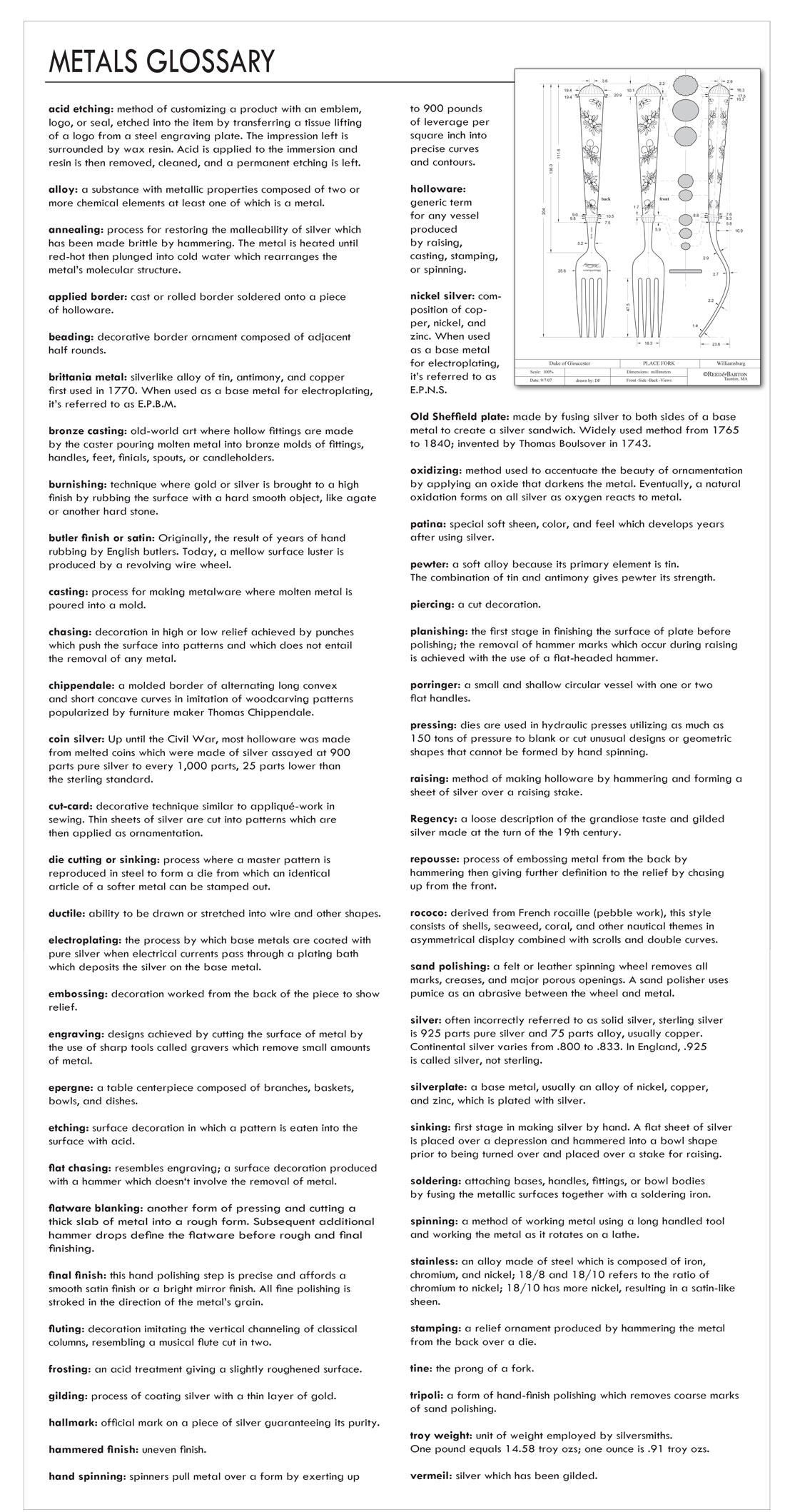 Glass’ brilliant luster, smooth touch, and harmonious ring have mesmerized man since the first batch of sand and potash was melted to produce a glowing product. Glassware dates back to 2500 B.C. during the Bronze Age. Egyptian glass, which can be traced 3,000 years, can be found in museums today. The Egyptians are credited with inventing the blowpipe. Subsequently, Romans blew glass not just for table and decorative use, but for windows and glass tiles for floors. It was at the beginning of the 13th century that glassware thrived, particularly in Venice. Beautifully-colored Venetian glass became known throughout the world. Up to that time, all glass was opaque or tinted. Venetians also discovered a method to produce cristallo, a transparent, clear product.

As with porcelain, the process took many years to disseminate though, and it wasn’t until the early 1600s that French and German glass manufacturing was under way. Germans improved the product by replacing soda ash with potash and lime and called the result Bohemian Glass. England’s contribution was the addition of lead oxide, which lent sparkle, weight, and ring, acquiring a purity and brilliance like rock crystal’s, hence the name crystal. Lead crystal must contain at least 24% lead oxide. The more lead, the clearer and more refractive the ware. Liquid stored in lead crystal over a period of time can leach so it is unwise to store liquids, particularly acidic liquids, in crystal for long periods of time.

Glassware was not introduced to the U.S. until the early 19th century since most people could not afford the liquid gold. Besides, pewter and wood proved just fine as drinking ware. But with the 1825 opening of the Sandwich Glass Factory in Massachusetts, glass tableware became abundant and affordable. Glass is primarily comprised of sand and potash. Crystal is made by melting a mixture of three parts silica (fine sand) to two parts lead oxide, one part potash, and other ingredients to facilitate melting in tanks. This mixture, called the batch, is given a first (also called coarse) melting in temperatures between 1000 and 2000 degrees for about 36 hours. A fine melting follows in which most of the gas and air bubbles escape. One melting process can take 12 hours. Electric furnaces have accelerated the process and keeps the melting constant, but the tanks must be fired 24 hours a day.

With handmade glass, a glassmaker inserts an iron blowpipe into the furnace opening, fittingly called the glory hole. He pulls from it a gob of molten metal on the end of his blowpipe and shapes the glass by spinning and blowing. This offhand forming will result in a bubble or a gob. Another technique calls for placing molten glass at the end of the pipe, inserting the gob into a mold, and blowing the glass to fit the mold. Then the master blower receives the pipe from the blower, who has formed the bowl at the end. The master blower casts a small amount of molten glass on the bowl and uses stem shears to pull the stem into the desired form. Another gob of glass is added to form the foot which is formed into a flat disc.

To produce bowls, vases, and other hollow items, a blower produces a large bubble at the end of the pipe for the master who keeps the glass in motion by rolling the pipe on his bench, and cuts the piece with special tools. In yet another method, the blown bowl is set on a steel form with the pipe. Under the form is the molten glass which will produce the stem and foot mechanically. The worker maneuvers the machine which discharges the proper amount of glass into the machine to produce the stem and foot which are attached to the bowl. Stemware is slowly cooled in a lehr to prevent the glass from cracking. Then the removal of the caps (where the piece was broken off from the pipe) is done via machine which makes a cut with a diamond blade to neutralize surface tension.

In cut crystal, decoration is either by hand or machine. By hand, a worker marks the glass with a crayoned design to guide the cutter, who works with a rough course grit wheel. Fine cutting then follows giving a smooth finish, although the cut still has a matte gray finish. An acid polish removes this finish, giving the glass its brilliance. In the case of machine-cut ware, computer-controlled machines cut many pieces at a time. These glasses have a gray cut which, too, must be polished in an acid bath. In the case of machine-made molded ware, the cut design is incorporated into the mold to produce what looks like a cut pattern. The quality of a cutting is usually felt at the edge; the sharper the edge, the more likely it’s a quality piece. Acid baths smooth some of the edge, but a molded pattern is almost always smooth to the touch.

For other forms of decorated glass, there are options. Hand-applied gold or platinum banding is fired to keep the decoration adhered to the glass. Ceramic decals, silk screened decorations, and transfers must be fired as well. Major advances in machine-made glass have included computer-control furnaces (1970); the use of alloyed molds instead of cast iron (1980); and electronic inspection (1980).

The manufacture of glassware can be expensive because of the heat required to melt the raw materials, and, in the case of handmade glassware, the labor intensive nature of the craft. The more handiwork on a product, the more skill required and therefore, a more expensive product. Aah! The wonders of glass!